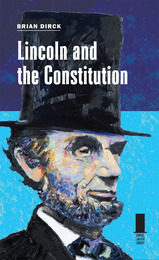 In this highly readable study of Abraham Lincoln’s thoughts and actions concerning the U.S. Constitution, Brian R. Dirck combines extensive primary research and thoughtful, accessible consideration of Lincoln’s views to reveal new insights into Lincoln’s impact on the U.S. Constitution. In the statesman’s roles as a leading antebellum politician, an ardent critic of slavery, and the president of the United States during the Civil War, Lincoln fashioned a strong antislavery constitutional ideology and articulated a constitutional vision of the Civil War that reinforced his determination to restore the Union.

Grounding Lincoln’s constitutionalism in his reading habits and early legal career, Dirck masterfully balances biographical details, Lincoln’s value system, the opinions of his supporters and critics, and key events and ideas to show how his thinking about the U.S. Constitution changed over time. From Lincoln’s deep reverence for the work of the Founding Fathers to his innovative interpretation of presidential war powers, Dirck reveals Lincoln’s understanding of the Constitution to be progressive, emphasizing federal power as a tool to develop the economy, and pragmatic, in that he was often forced to make decisions on the fly during a remarkably volatile period in American history. Lincoln used his conception of presidential war powers to advance the twin causes of Union and emancipation, and Dirck explores the constitutional problems stirred by curbs Lincoln placed on civil liberties, internal security, and freedom of expression during wartime.

More than a straightforward overview of Lincoln’s constitutional views, Lincoln and the Constitution provides a starting point for further inquiry into interpretations and defenses as well as the political, intellectual, and cultural traditions of the founding document of the United States. In the end, Dirck shows, Lincoln viewed the political and legal traditions of the Constitution with optimism, emphasizing
throughout his life the possibilities he believed the document held—always keeping faith in it and swearing to protect it, even as he was awash in a sea of blood and controversy.

Brian R. Dirck, a professor of history at Anderson University, is the author of Lincoln the Lawyer, Lincoln Emancipated: The President and the Politics of Race, and Lincoln and Davis: Imagining America, 1809–1865.

TABLE OF CONTENTS
Cover
Book Title
Copyright
Contents
Prologue
1. The Constitution in Lincoln's Early Years
2. Lincoln, the Constitution, and Slavery during the Sectional Crisis
3. Lincoln and The Declaration of Independence
4. Becoming President and Defending the Union
5. The War, Civil Liberties, and Ex Parte Merryman
6. Congress and Winning the War
7. Lincoln and the Radicals
8. The War and African Americans
Epilogue
Acknowledgments
Notes
Bibliography
Index
Author Biography
The Concise Lincoln Library
Back Cover