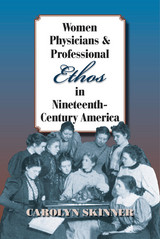 Women physicians in nineteenth-century America faced a unique challenge in gaining acceptance to the medical field as it began its transformation into a professional institution. The profession had begun to increasingly insist on masculine traits as signs of competency. Not only were these traits inaccessible to women according to nineteenth-century gender ideology, but showing competence as a medical professional was not enough. Whether women could or should be physicians hinged mostly on maintaining their femininity while displaying the newly established standard traits of successful practitioners of medicine.

Women Physicians and Professional Ethos provides a unique example of how women influenced both popular and medical discourse. This volume is especially notable because it considers the work of African American and American Indian women professionals. Drawing on a range of books, articles, and speeches, Carolyn Skinner analyzes the rhetorical practices of nineteenth-century American women physicians. She redefines ethos in a way that reflects the persuasive efforts of women who claimed the authority and expertise of the physician with great difficulty.

Descriptions of ethos have traditionally been based on masculine communication and behavior, leaving women’s rhetorical situations largely unaccounted for. Skinner’s feminist model considers the constraints imposed by material resources and social position, the reciprocity between speaker and audience, the effect of one rhetor’s choices on the options available to others, the connections between ethos and genre, the potential for ethos to be developed and used collectively by similarly situated people, and the role ethos plays in promoting social change. Extending recent theorizations of ethos as a spatial, ecological, and potentially communal concept, Skinneridentifies nineteenth-century women physicians’ rhetorical strategies and outlines a feminist model of ethos that gives readers a more nuanced understanding of how this mode of persuasion operates for all speakers and writers.

Carolyn Skinner is an associate professor of English at the Ohio State University at Mansfield. She has published essays in Writing Center Journal, Technical Communication Quarterly, Rhetoric Society Quarterly, and Rhetoric Review. She is one of the recipients of the 2006 International Writing Centers Association award for outstanding scholarship in an article.