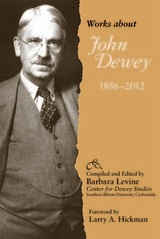 Works of John Dewey, 1886–2012 is an invaluable and meticulously compiled resource for the growing number of scholars and researchers seeking a deeper understanding of the work of the prominent American philosopher, psychologist, and educational reformer.

Dewey (1859–1952), an influential philosopher credited with the founding of pragmatism and also recognized as a pioneer in functional psychology and the progressive moment in education, was hailed by Life magazine in 1990 as one of the one hundred most important Americans of the twentieth century. This rich and continually expanding compendium of historical and more recent essays, research, and references is a testament to the growing interest in Dewey’s intellectual work and his measurable impact in the United States and throughout the world.

In Works of John Dewey, 1886–2012, some four thousand new entries are presented in ebook format, in addition to those from earlier print and electronic editions dating back to 1995. Copies of most of the works have been obtained and are stored at the Center for Dewey Studies. For the first time, users can access all items from all editions in one user-friendly format. Jump links to alphabetical sections facilitate movement through the vast collection of entries. Users can search by keyword and author.

AUTHOR BIOGRAPHY
Barbara Levine has been a textual editor at the Center for Dewey Studies, Southern Illinois University at Carbondale since 1974. She served as editor of Sidney Hook: A Checklist of Writings. She has also been a major contributor to the editing of thirty-seven volumes of The Collected Works of John Dewey.

Larry A. Hickman is the director of the Center for Dewey Studies and professor of philosophy at Southern Illinois University Carbondale. He is coeditor of John Dewey's Educational Philosophy in International Perspective: A New Democracy for the Twenty-First Century (published by SIU Press, 2009).
TABLE OF CONTENTS
Title Page
Copyright
Contents
Foreword To The 2012 Edition
Preface To The 2012 Edition
Foreword To The 2006 Supplement
Preface To The 2006 Supplement
Preface To The 1996 Edition
A
B
C
D
E
F
G
H
I
J
K
L
M
N
O
P
Q
R
S
T
U
V
W
Y
Z
Reviews Of Dewey's Works