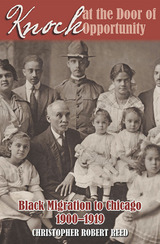 Disputing the so-called ghetto studies that depicted the early part of the twentieth century as the nadir of African American society, this thoughtful volume by Christopher Robert Reed investigates black life in turn-of-the-century Chicago, revealing a vibrant community that grew and developed on Chicago’s South Side in the early 1900s. Reed also explores the impact of the fifty thousand black southerners who streamed into the city during the Great Migration of 1916–1918, effectively doubling Chicago’s African American population. Those already residing in Chicago’s black neighborhoods had a lot in common with those who migrated, Reed demonstrates, and the two groups became unified, building a broad community base able to face discrimination and prejudice while contributing to Chicago’s growth and development.

Reed not only explains how Chicago’s African Americans openly competed with white people for jobs, housing and an independent political voice but also examines the structure of the society migrants entered and helped shape. Other topics include South Side housing, black politics and protest, the role of institutionalized religion, the economic aspects of African American life,  the push for citizenship rights and political power for African Americans, and the impact of World War I and the race riot of 1919. The first comprehensive exploration of black life in turn-of-the-century Chicago beyond the mold of a ghetto perspective, this revealing work demonstrates how the melding of migrants and residents allowed for the building of a Black Metropolis in the 1920s.

Christopher Robert Reed is a professor emeritus of history and a former director of the St. Clair Drake Center for African and African American Studies at Roosevelt University in Chicago.  He is the author of five books, including The Depression Comes to Chicago’s South Side: Protest and Politics, 1930–1933 and The Rise of Chicago’s Black Metropolis, 1920–1929.

TABLE OF CONTENTS
Cover
Jacket Flaps
Frontispiece
Title page
Copyright
Contents
List of Illustrations
Preface
Acknowledgments
Introduction
1. The Fabric of Society
2. Black Chicago and the Color Line
3. The Structure of Society
4. Housing along an Elastic Streetscape
5. Religion and Churches
6. Labor and Business
7. Politics and Protest
8. The Reuniting of a People: A Tale of Two Black Belts
9. Employment and Political Contention
10. Martial Ardor, the Great War, and the Race Riot of 1919
Epilogue
Notes
Bibliography
Index
Author biography
Back Cover