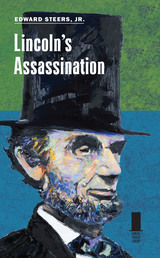 For 150 years, the assassination of Abraham Lincoln has fascinated the American people. Relatively few academic historians, however, have devoted study to it, viewing the murder as a side note tied to neither the Civil War nor Reconstruction. Over time, the traditional story of the assassination has become littered with myths, from the innocence of Mary Surratt and Samuel Mudd to John Wilkes Booth’s escape to Oklahoma or India, where he died by suicide several years later. In this succinct volume, Edward Steers, Jr. sets the record straight, expertly analyzing the historical evidence to explain Lincoln’s assassination.

The decision to kill President Lincoln, Steers shows, was an afterthought. John Wilkes Booth’s original plan involved capturing Lincoln, delivering him to the Confederate leadership in Richmond, and using him as a bargaining chip to exchange for southern soldiers being held in Union prison camps. Only after Robert E. Lee surrendered the Army of Northern Virginia and Richmond fell to Union forces did Booth change his plan from capture to murder. As Steers explains, public perception about Lincoln’s death has been shaped by limited but popular histories that assert, alternately, that Secretary of War Edwin Stanton engineered the assassination or that John Wilkes Booth was a mad actor fueled by delusional revenge. In his detailed chronicle of the planning and execution of Booth’s plot, Steers demonstrates that neither Stanton nor anyone else in Lincoln’s sphere of political confidants participated in Lincoln’s death, and Booth remained a fully rational person whose original plan to capture Lincoln was both reasonable and capable of success. He also implicates both Mary Surratt and Samuel Mudd, as well as other conspirators, clarifying their parts in the scheme.

At the heart of Lincoln’s assassination, Steers reveals, lies the institution of slavery. Lincoln’s move toward ending slavery and his unwillingness to compromise on emancipation spurred the white supremacist Booth and ultimately resulted in the president’s untimely death. With concise chapters and inviting prose, this brief volume will prove essential for anyone seeking a straightforward, authoritative analysis of one of the most dramatic events in American history.

TABLE OF CONTENTS
Cover
Jacket Flaps
Title Page
Copyright
Contents
Introduction
1. Now by God I Will Put Him Through
2. Black Flag Warfare
3. We Are Tired of War on the Old Camp Ground
4. John Wilkes Booth
5. The Action Team
6. An Unexpected Change in Plans
7. I Never Saw Him So Supremely Cheerful
8. Caesar Must Bleed for It
9. Sic Semper Tyrannis
10. We Have Assassinated the President‍
Gallery of Illustrations
11. Dr. Mudd
12. The Giant Sufferer
13. Abandoned
14. Damn the Rebels,This Is Their Work!
15. The Roundup
16. The Ring Closes
17. Tell My Mother I Die for My Country
18. Inter Arma Leges Silent
Epilogue
Acknowledgments
Notes
Index
Author Biography
Other Books in the Concise Lincoln Library
Back Cover