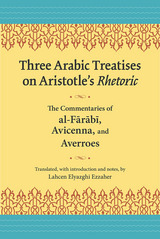 Winner, 2018 MLA Aldo and Jeanne Scaglione Prize for a Translation of a Scholarly Study of Literature

It is increasingly well documented that western rhetoric’s journey from pagan Athens to the medieval academies of Christian Europe was significantly influenced by the intellectual thought of the Muslim Near East. Lahcen Elyazghi Ezzaher contributes to the contemporary chronicling of this influence in Three Arabic Treatises on Aristotle’s Rhetoric: The Commentaries of al-Farabi, Avicenna, and Averroes, offering English translations of three landmark medieval Arabic commentaries on Aristotle's famous rhetorical treatise together in one volume for the first time.  Elegant and practical, Elyazghi Ezzaher’s translations give English-speaking scholars and students of rhetoric access to key medieval Arabic rhetorical texts while elucidating the unique and important contribution of those texts to the revival of European interest in the rhetoric and logic of Aristotle, which in turn influenced the rise of universities and the shaping of Western intellectual life.

With a focus on Book I of Aristotle’s Rhetoric, the commentaries ofal-Farabi, Avicenna, and Averroes translated by Elyazghi Ezzaher are paramount examples of an extensive Arabic-Muslim tradition of textual commentary while also serving as rich corollaries to the medieval Greek and Latin rhetorical commentaries produced in Europe. Elyazghi Ezzaher’s translations are each accompanied by insightful scholarly introductions and notes that contextualize—both historically and culturally—these immensely significant works while highlighting a comparative, multidisciplinary approach to rhetorical scholarship that offers new perspectives on one of the field’s foundational texts.

A remarkable addition to rhetorical studies, Three Arabic Treatises on Aristotle’s Rhetoric: The Commentaries of al-Farabi, Avicenna, and Averroes not only provides vibrant English translations of essential medieval Arabic rhetorical texts but also challenges scholars and students of rhetoric to consider their own historical, cultural, and linguistic relationships to the texts and objects they study.

Lahcen Elyazghi Ezzaher is a professor of English at the University of Northern Colorado, where he specializes in histories and theories of rhetoric, theories of discourse, and translation studies. He is the author of a book, Writing and Cultural Influence: Studies in Rhetorical History, Orientalist Discourse, and Post-Colonial Criticism, and his award-winning work has appeared in numerous journals, including Rhetorica and Advances in the History of Rhetoric.