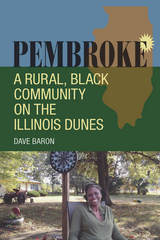 With a population of about two thousand, Pembroke Township, one of the largest rural, black communities north of the Mason-Dixon Line, sits in an isolated corner of Kankakee County, Illinois, sixty-five miles south of Chicago. It is also one of the poorest places in the nation. Many black farmers from the South came to this area during the Great Migration; finding Chicago to be overcrowded and inhospitable, they were able to buy land in the township at low prices. The poor soil made it nearly impossible to establish profitable farms, however, and economic prosperity has eluded the region ever since. Pembroke: A Rural, Black Community on the Illinois Dunes chronicles the history of this inimitable township and shows the author’s personal transformation through his experiences with Pembroke and its people. A native of nearby Kankakee, author Dave Baron first traveled to Pembroke on a church service trip at age fifteen and saw real poverty firsthand, but he also discovered a community possessing grace and purpose.

Baron begins each chapter with a personal narrative from his initial trip to Pembroke. He covers the early history of the area, explaining how the unique black oak savanna ecosystem was created and describing early residents, including Potawatomi tribes and white fur traders. He introduces readers to Pap and Mary Tetter, Pembroke’s first black residents, who—according to local lore—assisted fugitives on the Underground Railroad; details the town’s wild years, when taverns offered liquor, drugs, and prostitution; discusses the many churches of Pembroke and the nearby high school where, in spite of sometimes strained relations, Pembroke’s black students have learned alongside white students of a neighboring community since well before Brown v. Board of Education; outlines efforts by conservation groups to preserve Pembroke’s rare black oak savannas; and analyzes obstacles to and failed attempts at economic development in Pembroke, as well as recent efforts, including organic farms and a sustainable living movement, which may yet bring some prosperity.

Based on research, interviews with residents, and the author’s own experiences during many return trips to Pembroke, this book—part social, cultural, legal, environmental, and political history and part memoir—profiles a number of the colorful, longtime residents and considers what has enabled Pembroke to survive despite a lack of economic opportunities. Although Pembroke has a reputation for violence and vice, Baron reveals a township with a rich and varied history and a vibrant culture.
AUTHOR BIOGRAPHY
Dave Baron is a constitutional litigator for the city of Chicago with a degree in political science and economics from the University of Notre Dame and a juris doctor from Harvard Law School. He has been involved in a number of groups dedicated to improving race relations and combatting poverty.
TABLE OF CONTENTS