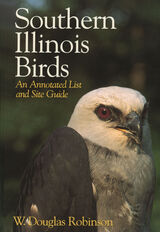 Designed to help bird watchers in the field and at home discover the significance of their observations, Southern Illinois Birds documents current knowledge of the birds of southern Illinois by surveying both the published literature on the subject and the unpublished field notes of active observers summarizing many important observations that are not readily available elsewhere.

Bordered on three sides by major rivers, with both upland and lowland forests and dramatic topographic relief in the unglaciated Shawnee Hills, southern Illinois offers a wide variety of habitats and birds unusual to Illinois and the Midwest in general. Compared with studies in central and northern Illinois, there have been few active field observers in the south; yet the contributions of those who worked in southern Illinois have been considerable. Robinson displays their efforts convincingly in this book.

Southern Illinois Birds includes information on early arrival and late departure dates of migrants, the highest reported single-day counts in each season, and records of all vagrants. In addition, Robinson includes maps and guides to some of the best birding areas in the region to encourage birders and others to explore the many birding and scenic attractions in southern Illinois.

Robinson has produced a definitive reference for ornithologists and amateur bird watchers, conservation and government agencies, college students in biology, and future researchers who wish to determine the status and abundance of southern Illinois birds.

W. Douglas Robinson, born and raised in southern Illinois, earned two degrees at Southern Illinois University and a PhD at the University of Illinois at Urbana-Champaign. He studies responses of birds to environmental change in North America and Panama. In addition to conducting scientific research, he enjoys traveling the world in search of avian adventures. He is currently a professor of wildlife science at Oregon State University.