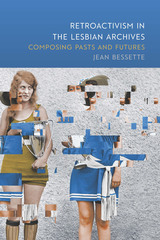 Grassroots historiography has been essential in shaping American sexual identities in the twentieth century. Retroactivism in the Lesbian Archives examines how lesbian collectives have employed “retroactivist” rhetorics to propel change in present identification and politics. By appropriating and composing versions of the past, these collectives question, challenge, deconstruct, and reinvent historical discourse itself to negotiate and contest lesbian identity.

Bessette considers a diverse array of primary sources, including grassroots newsletters, place-based archives, experimental documentary films, and digital video collections, to investigate how retroactivists have revised and replaced dominant accounts of lesbian deviance. Her analysis reveals inventive rhetorical strategies leveraged by these rhetors to belie the alienating, dispersing effects of discourses that painted women with same-sex desire as diseased and criminal. Focusing on the Daughters of Bilitis, the Lesbian Herstory Archives, and the June L. Mazer Archives, and on historiographic filmmakers such as Barbara Hammer and Cheryl Dunye, Bessette argues that these retroactivists composed versions of a queer past that challenged then-present oppressions, joined together provisional communities, and disrupted static definitions and associations of lesbian identity.

Retroactivism in the Lesbian Archives issues a challenge to feminist and queer scholars to acknowledge how historiographic rhetoric functions in defining and contesting identities and the historical forces that shape them.
AUTHOR BIOGRAPHY

Jean Bessette is an assistant professor at the University of Vermont whose essays have been published in Rhetoric Review, College Composition and Communication, Computers and Composition, and Rhetoric Society Quarterly.

4. “A History of Discontinuities”: On the Past and Future of Retroactivism