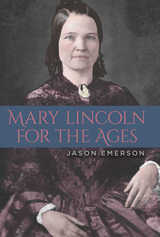 In this sweeping analytical bibliography, Jason Emerson goes beyond the few sources usually employed to contextualize Mary Lincoln’s life and thoroughly reexamines nearly every word ever written about her. In doing so, this book becomes the prime authority on Mary Lincoln, points researchers to key underused sources, reveals how views about her have evolved over the years, and sets the stage for new questions and debates about the themes and controversies that have defined her legacy.

Mary Lincoln for the Ages first articulates how reliance on limited sources has greatly restricted our understanding of the subject, evaluating their flaws and benefits and pointing out the shallowness of using the same texts to study her life. Emerson then presents more than four hundred bibliographical entries of nonfiction books and pamphlets, scholarly and popular articles, journalism, literature, and juvenilia. More than just listings of titles and publication dates, each entry includes Emerson’s deft analysis of these additional works on Mary Lincoln that should be used—but rarely have been—to better understand who she was during her life and why we see her as we do. The volume also includes rarely used illustrations, including some that have never before appeared in print.

A roadmap for a firmer, more complete grasp of Mary Lincoln’s place in the historical record, this is the first and only extensive, analytical bibliography of the subject. In highlighting hundreds of overlooked sources, Emerson changes the paradigm of Mary Lincoln’s legacy.
AUTHOR BIOGRAPHY
Jason Emerson is a journalist and an independent historian who has been researching and writing about the Lincoln family for more than twenty-five years. His works include The Madness of Mary Lincoln; Giant in the Shadows: The Life of Robert T. Lincoln; Mary Lincoln’s Insanity Case: A Documentary History; and Lincoln’s Lover: Mary Lincoln in Poetry.
TABLE OF CONTENTS
Title Page
Copyright
Epigraphs
Contents
Acknowledgments
Part One
Introduction
The Common Canon of Mary Lincoln
Part Two: Analytical Bibliography
Nonfiction (books and pamphlets)
Newspaper articles and interviews
Government documents
Gallery of illustrations
Scholarly and popular articles
Fiction books and stories
Juvenile books and articles
Poetry and music
Drama
Websites
Notes
Essay “Common Canon”
Authors and Editors
Titles
Subjects
About The Author
Back Cover