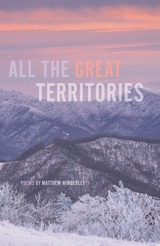 In 2012 Matthew Wimberley took a two-month journey, traveling and living out of his car, during which time he had planned to spread his father’s ashes. By trip’s end, the ashes remained, but Wimberley had begun a conversation with his deceased father that is continued here in his debut collection.

All the Great Territories is a book of elegies for a father as well as a confrontation with the hostile, yet beautiful landscape of southern Appalachia. In the wake of an estranged father’s death, the speaker confronts that loss while celebrating the geography of childhood and the connections formed between the living and the dead. The narrative poems in this collection tell one story through many: a once failed relationship, the conversations we have with those we love after they are gone. In an attempt to make sense of the father-son relationship, Wimberley embraces and explores the pain of personal loss and the beauty of the natural world.

Stitching together sundered realms—from Idaho to the Blue Ridge Mountains and from the ghost of memory to the iron present of self—Wimberley produces a map for reckoning with grief and the world’s darker forces. At once a labor of love and a searing indictment of those who sensationalize and dehumanize the people and geography of Appalachia, All the Great Territories sparks the reader forward, creating a homeland all its own. “Because it’s my memory I can give it to you,” Wimberley’s speaker declares, and it’s a promise well kept in this tender and remarkable debut.
AUTHOR BIOGRAPHY
Matthew Wimberley received his MFA in poetry from New York University. His poems have appeared in Best New Poets, Missouri Review, Poem-a-Day, diode, Pleiades,Shenandoah, and River Styx, among others.

TABLE OF CONTENTS
Cover
Title
Copyright
Quote
Contents
*
Black Mountains
Homily
Elegy Written in Dust Kicked Up along a Back Road
In the Morning, the Spirit Begins to Speak
The Snow Speaks Its Own Name
Possum
Phenology
Husk
On Trial in the Court of Nature
To a Stranger Lost in the Country
* *
Prelude
All the Great Territories
Incineration
Holding My Father
Words for My Father from Salmon, Idaho
Pantoum Holding an Extinct Bird
Epitaph
Infinity on the Glass
Emblem for Death Carved into a Tree
Cold Light
* * *
At Night
Silent Woods
Ghazal Returning from Exile by the Light of a County Fair
Though He Is Gone, I Carry Him Down from the Mountain
Myth
Here on Earth, 1994
Absence
In Lieu of Flowers
Elegy Near Little Black Pine Rough
The Celebrated Colors of the Local Sunsets
Acknowledgments
Other Series Titles
Back Cover