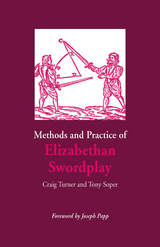 Featuring period drawings and prints of swordplay, this book examines and compares three Elizabethan fencing manuals written in English before 1600: Giacomo Di Grassi’s His True Arte of Defense (1594), Vincentio Saviolo’s His Practice in Two Bookes (1595), and George Silver’s Paradoxes of Defence and Bref Instructions upon My Paradoxes of Defence (1599).

More than a technical manual on swordplay, this book explores the influence of a new form of violence introduced into Elizabethan culture by the invention of the rapier. The authors examine the rapier’s influence on the various social classes, the clash between the traditional English fencing masters and those embracing the new style, the growing concern with unregulated dueling, and the frequent references to rapier play in the works of Shakespeare and his contemporaries.

As producer Joseph Papp notes in his foreword, this is a book that "makes a difference in performance."

AUTHOR BIOGRAPHY
Craig Turner is a professor of theater at the University of North Carolina, Chapel Hill.
Tony Soper is an actor and a fight director who has handled fight roles ranging from Shakespeare to samurai.
REVIEWS

“Methods and Practice of Elizabethan Swordplay is written by two movement-oriented actors who analyze the writings and teachings of three Elizabethan fencing masters, arguing that by knowing what Elizabethans were being taught in fencing classes, we can make the leap that this is what Shakespeare’s actors did on stage. [The] authors share a love of theatre, combined with professional experience as both actors and stage combat choreographers. . . . Methods and Practice of Elizabethan Swordplay is a must for a stage combat choreographer, for a Shakespeare study program, or for an English drama teacher who can fence. . . . I heartily recommend that [this book] be added to any Shakespeare collection.”—Theatre Journal

“This splendid and absorbing book is an invaluable reference for fight directors and all those involved in staging exhibitions of historical swordplay. I recommend it wholeheartedly.”—Patrick Crean, fight master of the Stratford, Ontario, Shakespeare Festival