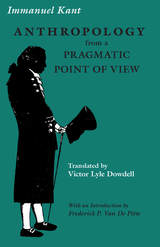 In the fall semester of 1772/73 at the Albertus University of Kö nigsberg, Immanuel Kant, metaphysician and professor of logic and metaphysics, began lectures on anthropology, which he continued until 1776, shortly before his retirement from public life. His lecture notes and papers were first published in 1798, eight years after the publication of the Critique of Judgment, the third of his famous Critiques. The present edition of the Anthropology is a translation of the text found in volume 7 of Kants gesammelte Schriften, edited by Oswald Kü lpe.

Kant describes the Anthropology as a systematic doctrine of the knowledge of humankind. (He does not yet distinguish between the academic discipline of anthropology as we understand it today and the philosophical.) Kant’ s lectures stressed the "pragmatic" approach to the subject because he intended to establish pragmatic anthropology as a regular academic discipline. He differentiates the physiological knowledge of the human race— the investigation of "what Nature makes of man"— from the pragmatic— "what man as a free being makes of himself, what he can make of himself, and what he ought to make of himself." Kant believed that anthropology teaches the knowledge of humankind and makes us familiar with what is pragmatic, not speculative, in relation to humanity. He shows us as world citizens within the context of the cosmos.

Summarizing the cloth edition of the Anthropology, Library Journal concludes: "Kant’ s allusions to such issues as sensation, imagination, judgment, (aesthetic) taste, emotion, passion, moral character, and the character of the human species in regard to the ideal of a cosmopolitan society make this work an important resource for English readers who seek to grasp the connections among Kant’ s metaphysics of nature, metaphysics of morals, and political theory. The notes of the editor and translator, which incorporate material from Ernst Cassirer’ s edition and from Kant’ s marginalia in the original manuscript, shed considerable light on the text."

AUTHOR BIOGRAPHY
Victor L. Dowdell was an instructor in classics at Nashotah House, Wisconsin, and a dean and professor of Greek at St. Michael’ s Seminary, Puerto Rico.

Hans H. Rudnick is a professor of English at Southern Illinois University at Carbondale.

TABLE OF CONTENTS
Cover
Title Page
Copyright
Contents
Preface
Introduction by Frederick P. Van De Pitte
Anthropology: From a Pragmatic Point of View
Introduction
Part One. Anthropological Didactic: On the Art of Knowing the Interior as well as the Exterior of Man
On the Cognitive Faculty
On Egoism
On Being Arbitrarily Conscious of One's Ideas
On Self-Observation
On the Ideas We Have without Being Aware of Them
On Distinctness and Indistinctness in Relation to the Consciousness of One's Ideas
On Sensibility in Contrast to Understanding
Apology for Sensibility
On the Potentiality of the Congitive Faculty
On the Artificial Games Played with Sensory Perceptions
On the Admissible Moral Perception
On the Five Senses
On the Inner Sense
On the Causes of Increasing or Decreasing Sensory Perceptions According to Degree
On the Decreasing, Weakening, and Entire Loss of the Faculty of the Senses
On the Sensory Productive Faculty with All Its Branches
Of the Faculty of Visualizing the Past and the Future by means of the Imagination
On Involuntary Invention in a Sound Mental State, that is, on Dreams
On the Faculty of Designation (facultas signatrix)
On the Faculty of Cognition as Far as It Is Based on Understanding
Anthropological Comparison of the Three Higher Cognitive Faculties with Each Other
On the Soul's Weaknesses and Illnesses with Respect to Its Cognitive Faculty
On the Talents of the Cognitive Faculty
On the Specific Differences between the Comparative and the Argumentative Intelligence
On Sensuous Pleasure
Third Book: On the Faculty of Desire
On Emotion in Contrast to Passion
On the Emotions in Particular
On Passions
On the Highest Physical Good
On the Highest Ethicophysical Good
Part Two. Anthropological Characterization On How to Know a Man's Interior from His Exterior
A. The Character of the Person
B. The Character of the Sexes
C. the Character of Nations
D. On the Character of Races
E. On the Charater of the Species
Notes
Index
Back Cover