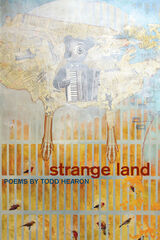 Todd Hearon’s haunting debut collection chronicles the twin paths of isolation and desire in the search for meaning and union with others. On his pilgrimage through the lost worlds of earth and the soul, the speaker encounters drought in both the literal and spiritual sense as he confronts desolate landscapes, from the brown remnants of ruined cities, to the depths of the human heart and man’s capacity for utter destruction. Yet even though he frequently encounters darkness, he never ceases to seek beauty. He is a man who wears many faces, from Adam, staring down a bleak future bereft of Paradise, to the doomed poet Shelley, drowned off the coast of Italy. He speaks as a man adrift in his own life, seeking an answer to his emptiness, an estranged traveler through memory and longing. Lyrical and intense, Strange Land is a quest for understanding and human connection.

It goes without saying

a word:  the world under cover

of midnight snow, what we have known

of pageantry and lilac, leaf and song

Waking at dawn into the tremulous blue

of the room, as in earth’s afterglow,

we lie, lidless, listening, as crows

call out the ear’s horizons.

What year is it?  Into what country were we born

and now must make our way?  Outside the pane

the stillness feels ancestral but the ghosts

not yours, not mine.  My émigré,

we are cut off.  An ocean to the east

churns in chiaroscuro while unseen

ranges to the south deflect our passage,

This country seems the passing of a dream

a land’s amnesia where against the sky

Todd Hearon is a poet, playwright, and fiction writer.  His poems, translations, and reviews have appeared in The Southern Review, The New Republic, Harvard Review, Partisan Review, AGNI, Literary Imagination, Ploughshares, Poetry, Poetry London, and Slate.  He has been the recipient of numerous awards, including a 2007 PEN New England “Discovery” Award; the 2007 Friends of Literature Prize from Poetry magazine; a Dobie Paisano writing fellowship from the University of Texas at Austin; and a Paul Green Playwrights Prize.

The cover of Hearon's Strange Land features a menacing Mickey Mouse-like character emerging from an anthropomor­phic map of the United States—the allusive strange land, one assumes. Inside, the poems, written against the background of America's current wars of choice, bring even graver meaning to Hearon's tide: strange land is a kind of no-man's-land, a geogra­phy of our worst collective flaws.

As disquieting as much of the work in this collection is, however, Strange Land offers some hope. Many of Hearon's poems do extraordinary work to discover moments of commun­ion, precariously situated in times of conflict. "It was the past, could have been many pasts," he writes in 'Ancestors":

I sat down, we all sat down together.

One offered grace, I saw the fingers fall
over the loaves that never can be broken
though they be shattered, pulled apart as loves.

A reader will encounter both loss and connection here in the pulling apart of loaves, turned loves. Similarly, in "The Singers," which speaks to life's casualties, "the hawk's / indifference to the hare's terror," Hearon salvages a sense of our shared humanity, our ability to sing our fundamental truths.

Whether describing communion or the warlike tendencies of the species, Hearon's poems are finely drawn and impress with their subtle gravity A case in point is the poem "Translation," broken into seven otherwise continuous parts, whose final stan­za suggests a "thing of grace," a creature or aircraft of unknown origin, as much an image of battle as of birdwatching:

swam over us in flight, imagining