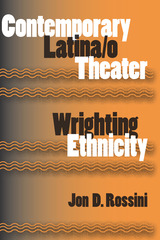 In Contemporary Latina/o Theater, Jon D. Rossini explores the complex relationship between theater and the creation of ethnicity in an unprecedented examination of six Latina/o playwrights and their works: Miguel Piñero, Luis Valdez, Guillermo Reyes, Octavio Solis, José Rivera, and Cherríe Moraga. Rossini exposes how these writers use the genre as a tool to reveal and transform existing preconceptions about their culture.  Through “wrighting”—the triplicate process of writing plays, righting misconceptions about ethnic identity, and creating an entirely new way of understanding Latina/o culture—these playwrights directly intervene in current conversations regarding ethnic identity, providing the tools for audiences to reexplore their previously held perspectives outside the theater.

Examining these writers and their works in both cultural and historical contexts, Rossini reveals how playwrights use the liminal space of the stage—an area on the thresholds of both theory and reality—to “wright” new insights into Latina/o identity.  They use the limits of the theater itself to offer practical explorations of issues that could otherwise be discussed only in highly theoretical terms.

Rossini traces playwrights’ methods as they address some of the most challenging issues facing contemporary Latinas/os in America: from the struggles for ethnic solidarity and the dangers of a community based in fear, to stereotypes of Latino masculinity and the problematic fusion of ethnicity and politics.  Rossini discusses the looming specter of the border in theater, both as a conceptual device and as a literal reality—a crucial subject for modern Latinas/os, given recent legislation and other actions.   Throughout, the author draws intriguing comparisons to the cultural limbo in which many Latinas/os find themselves today.

An indispensable volume for anyone interested in drama and ethnic studies, Contemporary Latina/o Theater underscores the power of theatricality in exploring and rethinking ethnicity.  Rossini provides the most in-depth analysis of these plays to date, offering a groundbreaking look at the ability of playwrights to correct misconceptions and create fresh perspectives on diversity, culture, and identity in Latina/o America.

Jon D. Rossini is an assistant professor in the theater and dance department at the University of California, Davis.  He has published essays on Nilo Cruz, David Henry Hwang, and José Rivera in Gestos, the Journal of American Drama and Theatre, and American Drama.