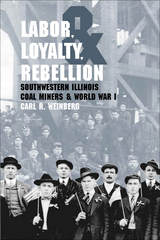 On April 5, 1918, as American troops fought German forces on the Western Front, German American coal miner Robert Prager was hanged from a tree outside Collinsville, Illinois, having been accused of disloyal utterances about the United States and chased out of town by a mob. In Labor, Loyalty, and Rebellion: Southwestern Illinois Coal Miners and World War I, Carl R. Weinberg offers a new perspective on the Prager lynching and confronts the widely accepted belief among labor historians that workers benefited from demonstrating loyalty to the nation.

The first published study of wartime strikes in southwestern Illinois is a powerful look at a group of people whose labor was essential to the war economy but whose instincts for class solidarity spawned a rebellion against mine owners both during and after the war. At the same time, their patriotism wreaked violent working-class disunity that crested in the brutal murder of an immigrant worker. Weinberg argues that the heightened patriotism of the Prager lynching masked deep class tensions within the mining communities of southwestern Illinois that exploded after the Great War ended.

Carl R. Weinberg is a labor historian whose articles and reviews have been published in New Georgia Encyclopedia, Encyclopedia of American Labor, Georgia Historical Quarterly, and Oral History Review. He teaches labor studies at Indiana University.

Historians have been divided over whether wartime patriotic feeling can weaken or strengthen labor movements. Some scholars have argued that national and working-class identities are at odds with one another, and that patriotism was a wedge used by corporations to divide the labor movement and to drive it apart from the rest of society. Other historians, however, have argued that labor unions had successfully integrated patriotic feeling with a sense of blue-collar solidarity to create what historian Gary Gerstle termed "working-class Americanism."[1] In Labor, Loyalty, and Rebellion: Southwestern Illinois Coal Miners and World War I, historian Carl R. Weinberg argues that during the First World War, the espousal of patriotism by union leaders and members failed to secure any real gains for workers.

Weinberg begins his book by exploring the social and economic aspects of working-class life in southwestern Illinois. The region had experienced a substantial influx of "old immigration" from the British Isles and, especially, Germany, as well as much of the "new immigration" from places such as Italy and Poland. Many immigrants worked in coal mines, which, along with agriculture, formed key pillars of the local economy. By the turn of the century, the United Mine Workers of America had enjoyed substantial success in organizing miners and in securing concessions from employers. In the second decade of the twentieth century, the Socialist party had likewise scored notable gains, winning elections to local offices, including the mayoralty of the city of O'Fallon, Illinois. But the combination of ethnic diversity and radicalism help explain why the region was ripe for turmoil following the outbreak of war in Europe in 1914.

During the period of American neutrality, southwestern Illinoisians split over the conflict in Europe. While a Catholic gathering held at St. Clare's Church in O'Fallon in 1916 denounced war as often immoral and issued a statement warning that "a pagan and false fetish of patriotism is endangering the Christian conception of peace," German- and Italian-Americans sometimes felt loyalty to their countries of origin (p. 33). At the same time, some Illinois mineworkers were concerned that big business sought to profit from the movement for national military preparedness.

When war broke out, key union leaders in Illinois sought to showcase the willingness of their unions to contribute to the war effort. The chief of the Illinois mineworkers union, Frank Farrington, was emphatic in his patriotism and worked hard to curb strike activity. Farrington's unwillingness to deploy strikes as a tactic was motivated in part, writes Weinberg, by a hope that the nation would be grateful for the restraint shown by miners who eschewed wartime strikes. But Farrington's stance does not seem to have secured any real gains for his union, and what successes miners did enjoy during the war were the fruit of unauthorized wildcat strikes. Ignoring the wishes of union leaders like Farrington, miners went on strike in 1917; the resultant pressure pushed the federal government into negotiating a deal with the employers which provided a wage boost (pursuant to a hike in the price of coal) as well as harsher penalties for engaging in certain kinds of strike activity. Subsequent strikes nudged the federal government into pledging that workers would actually receive a pay boost.

The surge of patriotic feeling was not limited to the union leadership; some workers, for example, insisted that mines fly the Stars and Stripes. However, the heightened feeling of patriotism had tragic consequences, and set the stage for the lynching of miner Robert Prager at the hands of a mob just outside of Collinsville, Illinois in April of 1918. The German-born Prager was a fairly recent arrival to the coalfields, having secured employment in an Illinois mine in 1918, but some locals, including some miners, began to suspect him of disloyalty or sabotage. Prager was subsequently hanged from a tree, but not before declaring, "go ahead and kill me, but wrap me in the flag when you bury me" (p. 127). Prager's murder attracted national attention, and, as Weinberg points out, was used to justify passage the following May of the procrustean Sedition Act amendment to the Espionage Act. Indeed, the Sedition Act was billed as a way of stifling the vigilante impulse--if federal prosecutors had more leeway to punish dissenters, it was argued, then average citizens would feel less inclined to join mobs targeting critics of the war.

The lynching of Prager has been covered by previous historians, but Weinberg's extensive research allows him to uncover some of the complexities of the tragedy. Weinberg argues that, by the time of the lynching, the leader of the mob, coal miner Joseph Riegel, may have come to fear that others considered him unpatriotic. Riegel, Weinberg finds, had some time earlier participated in a strike opposed by union leadership, and one union leader had gotten into a physical altercation with Riegel. The same union leader had painted the strike as disloyal, insinuating to the press that German influence lay behind the walkout. Weinberg suggests that Riegel, some of whose ancestors were probably German, perhaps saw leading the mob as a way of demonstrating his patriotism. "For Riegel," writes Weinberg, "the Prager lynching may have unconsciously provided the perfect opportunity to affirm his loyalty to the nation, once and for all" (p. 131).

In any case, Weinberg argues, the federal government did not display any new sympathy for the concerns of miners and worked to contain labor militancy. The administration's cool attitude is revealed in Labor Secretary William B. Wilson's 1917 plea for striking coal miners to return to work. Wilson depicted the entire country as a "great union" engaged in a struggle against autocratic Germany, warning that "it would be a serious blunder for any man to scab upon this great national union or do anything that will impair its chances for success" (pp. 74-75). In Wilson's eyes, workers who walked off the job were failing their fellow Americans. Weinberg also shows how the federal government used its legal muscle to quash strikes. Especially important here was the role of Edward C. Knotts, U.S. Attorney for the southern district of Illinois. Knotts had been active in the Democratic party and prior to his appointment as U.S. Attorney had been employed as a lawyer by a coal firm. When Collinsville smelter workers struck in 1917, the federal government enjoined the employees from striking. A number of men, charged with violating the injunction, were put on trial--trials during which Edward C. Knotts lent his help to the prosecution. Knotts's assistance, notes Weinberg, irritated Illinois Federation of Labor official Victor Olander, who observed that at one trial, "Knotts arose and made the closing plea as prosecutor, urging conviction of the defendant as a necessary measure to uphold the courts and the government in these times of war!" By siding with employers in a labor dispute, Olander pointed out, the U.S. Attorney was hindering "the work of patriotic citizens who are seeking to uphold the hands of the President to support the real government of the country and arouse to the highest possible pitch the spirit of true loyalty necessary to win the war" (p. 87). Weinberg concludes that the Wilson administration's repressive stance during and after the war left many workers distrustful of the federal government.

Labor Loyalty, and Rebellion is judiciously argued and meticulously researched. The book is packed with vivid details that help bring the period and the region alive. There are a few ways, however, in which the work could have been strengthened. Weinberg notes that Knotts's office had initiated legal proceedings against Severino Oberdan, an active union member, for violating the Espionage Act, writing that "documents related to the case suggest that Oberdan, a union militant and elected pit committeeman but probably not an IWW member, was the victim of a campaign led by the Nokomis Coal Company in collaboration with a conservative local union president and District Attorney Edward C. Knotts" (p. 104). Weinberg provides citations for the documents, but does not tell us about the contents of these papers or how they led him to his conclusions. Since Knotts, with his ties to the political and corporate worlds, plays such a central role in the region during this time, I believe that it would have made sense to give the reader a more specific notion of what these documents said.

I also think that Knotts's actions during and after the war needed more attention. As it turns out, Knotts was one of the most aggressive federal prosecutors in the entire country. According to figures compiled by historian Harry Scheiber, the U.S. Attorney's office for the southern district of Illinois had initiated thirty-three Espionage Act prosecutions as of June 30, 1918. Across the country, fewer than ten federal judicial districts saw more Espionage Act prosecutions started during that same time.[2] By examining more of these Espionage Act cases, I think that Weinberg could have provided us with a fuller picture of Knotts and his relationship to labor unions. It is interesting to note that the leadership of the Justice Department in Washington believed that some of Knotts's prosecutions were unjustified. In September and October of 1918, the Justice Department headquarters in Washington advised Knotts that that two of the Espionage Act cases that he had initiated lacked sufficient merit.[3] After the armistice, headquarters instructed Knotts that there was inadequate evidence that the defendants in two other prosecutions had violated the law.[4]

Too, the book would have benefited from a more extensive examination of election returns. The author, I believe, is correct to argue that the Wilson administration's repressive policies toward labor embittered workers and he explains the postwar burst of support for the Illinois Labor Party, but it would have been interesting to see if there was a depressed turnout for Democratic candidates in working-class neighborhoods in 1920. Along these lines, the book could have devoted more attention to the political trends of the era, and in particular to the role of the Democratic party. Leaving aside U.S. Attorney Knotts, whose sympathies seem to have been with employers, were local Democrats trying to address the grievances of miners prior to 1917? To what extent did the war and its aftermath crimp the local Democratic party's potential as an agent for working-class concerns? To what extent did the animosities, ethnic and otherwise, inflamed by the war slow the formation of what would become a New Deal coalition in southwestern Illinois?

These are minor criticisms, however. Labor, Loyalty, and Rebellion is a richly detailed and thought-provoking analysis of how one region responded to the crisis of the First World War, and it makes a vital contribution to our understanding of the relationships between nationalism, the labor movement and the federal government.