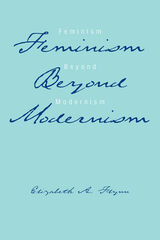 Too often postmodern feminism is unfairly identified as opposed to modernism and associated with subjectivism and relativism. Flynnaddresses these problems by provisionally defining postmodern feminism as problematizing and critiquing modernism without directly opposing it. Flynn also suggests that feminist traditions that reject modernism, such as radical and cultural feminisms, are antimodern rather than postmodern.

In this interdisciplinary study, Flynn defines feminist traditions broadly, situating her discussions within the contexts of literary studies and rhetoric and composition while simultaneously exploring the troubled relationship between these fields. Departing from accepted definitions of modernism, Flynn distinguishes between aesthetic modernism and Enlightenment modernism and uses the work of John Locke, Sigmund Freud, Charlotte Perkins Gilman, Michel Foucault, Donna Haraway, and others as benchmarks for historical placement. In addition, rereadings of works by Virginia Woolf, Adrienne Rich, Alice Walker, Louise Rosenblatt, and others demonstrate the complex ways in which they respond to modernist pressures and tendencies. From this context, Flynn’s Feminism Beyond Modernism reconfigures feminist traditions by defining postmodern feminism as a critique of modernism rather than as an antimodern opponent.

A recipient of grants from the National Science Foundation and the National Council of Teachers of English, Elizabeth A. Flynn is a professor in the Department of Humanities at Michigan Technological University. She is the coeditor (with Patrocinio P. Schweickart) of Gender and Reading: Essays on Readers, Texts, and Contexts and the founding editor of Reader.

REVIEWS
“Elizabeth Flynn offers readers a triple treat: an even-handed sorting out of important strands of feminist thought that manages to avoid reductionism; a compelling vision of postmodern feminisms as dynamic, multiple, and transformative; and a bracing account of how to relate theoretical concepts and pedagogical practices. This is a book that calls for intense conversation, as well as one that points the way toward future feminist projects.”—Andrea Lunsford, Stanford University
— -