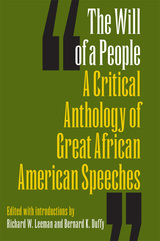 Drawing upon nearly two hundred years of recorded African American oratory, The Will of a People: A Critical Anthology of Great African American Speeches,edited by Richard W. Leeman and Bernard K. Duffy, brings together in one unique volume some of this tradition’s most noteworthy speeches, each paired with an astute introduction designed to highlight its most significant elements.

Arranged chronologically, from Maria Miller Stewart’s 1832 speech “Why Sit Ye Here and Die?” to President Barack Obama’s 2009 inaugural address, these orations are tied to many of the key themes and events of American history, as well as the many issues and developments in American race relations. These themes, events, and issues include the changing roles of women, Native American relations, American “manifest destiny,” abolitionism, the industrial revolution, Jim Crow, lynching, World War I and American self-determination, the rise of the New Deal and government social programs, the Civil Rights Movement and desegregation, the Vietnam War, Nixon and Watergate, gay and lesbian rights, immigration, and the rise of a mediated culture. Leeman and Duffy have carefully selected the most eloquent and relevant speeches by African Americans, including those by Sojourner Truth, Frederick Douglass, Frances Ellen Watkins Harper, Ida B. Wells-Barnett, Booker T. Washington, Mary Church Terrell, W. E. B. Du Bois, Marcus Garvey, Martin Luther King Jr., Malcolm X, Stokely Carmichael, Barbara Jordan, Jesse Jackson, and Marian Wright Edelman, many of which have never received significant scholarly attention.

The Will of a People is the first book to pair the full texts of the most important African American orations with substantial introductory essays intended to guide the reader’s understanding of the speaker, the speech, its rhetorical interpretation, and the historical context in which it occurred. Broadly representative of the African American experience, as well as what it means to be American, this valuable collectionwill serve as an essential guide to the African American oratory tradition.