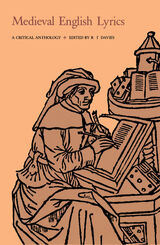 Medieval English Lyrics: A Critical Anthology
by R. T. Davies
Northwestern University Press, 1963
Paper: 978-0-8101-0075-6
The songs, carols, and poems of medieval England evoke a people whose principal literary preoccupations were their passions, religious and otherwise. This comprehensive collection presents 187 poems, earthy and ethereal, from this tradition.

All too often, this great body of poetry is represented in anthologies by a scattering of all-too-well-known poems, or by one or two unfamiliar ones for which there are often inadequate linguistic and critical notes. R.T. Davis, Lecturer in English Literature at the University of Liverpool, has incorporated extensive linguistic and critical notes on the lyrics in this collection, and even the student without experience with Middle English will be able to read and appreciate the works. In addition to being the first critical anthology of medieval English lyrics ever published, it is a revealing portrait of a people far removed from us in time, but very much like ourselves.
REQUEST ACCESSIBLE FILE