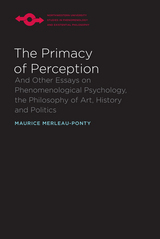 BUY
The Primacy of Perception: And Other Essays on Phenomenological Psychology, the Philosophy of Art, History and Politics
by Maurice Merleau-Ponty
translated by William Cobb
edited by James M. Edie
Northwestern University Press, 1964
Paper: 978-0-8101-0164-7
The Primacy of Perception brings together a number of important studies by Maurice Merleau-Ponty that appeared in various publications from 1947 to 1961. The title essay, which is in essence a presentation of the underlying thesis of his Phenomenology of Perception, is followed by two courses given by Merleau-Ponty at the Sorbonne on phenomenological psychology. "Eye and Mind" and the concluding chapters present applications of Merleau-Ponty's ideas to the realms of art, philosophy of history, and politics. Taken together, the studies in this volume provide a systematic introduction to the major themes of Merleau-Ponty's philosophy.
AUTHOR BIOGRAPHY
Maurice Merleau-Ponty (1908–1961) was a French phenomenological philosopher, strongly influenced by Karl Marx, Edmund Husserl, and Martin Heidegger in addition to being closely associated with Jean-Paul Sartre (who later stated he had been "converted" to Marxism by Merleau-Ponty ) and Simone de Beauvoir. At the core of Merleau-Ponty's philosophy is a sustained argument for the foundational role that perception plays in understanding the world as well as engaging with the world. Like the other major phenomenologists, Merleau-Ponty expressed his philosophical insights in writings on art, literature, linguistics, and politics.
REQUEST ACCESSIBLE FILE