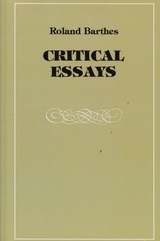 The essays in this volume were written during the years that its author's first four books were published in France. They chart the course of Barthe's criticism from the vocabularies of existentialism and Marxism (reflections on the social situation of literature and writer's responsibility before History) to a psychoanalysis of substances (after Bachelard) and a psychoanalytical anthropology (which evidently brought Barthes to his present terms of understanding with Levi-Strauss and Lacan).
AUTHOR BIOGRAPHY
ROLAND BARTHES (1915–1980), one of the most celebrated French intellectuals to have emerged since Jean-Paul Sartre, wrote on a variety of topics including semiology, literature, fashion, and photography. His works include Writing Degree Zero, S/Z, The Pleasure of the Text, Mythologies, A Lover's Discourse, and the autobiographical Roland Barthes.
RICHARD HOWARD won the 1970 Pulitzer Prize for Poetry for Untitled Subjects. A noted critic, he has also translated works by many prominent French authors, including Andre Gide, Claude Simon, Michel Leiris, and Marguerite Yourcenar.
TABLE OF CONTENTS


Translator's Note
Preface
The World as Object
Objective Literature
Baudelaire's Theater
Mother Courage Blind
The Brechtian Revolution
The Diseases of Costume
Literal Literature
Putting on the Greeks
Whose Theater? Whose Avant-Garde?
The Tasks of Brechtian Criticism
"Will Burns Us . . ."
The Last Happy Writer
There Is No Robbe-Grillet School
Literature and Metalanguage
Tacitus and the Funerary Baroque
La Sorcière
Zazie and Literature
Workers and Pastors
Kafka's Answer
On Brecht's Mother
Authors and Writers
Literature Today
Taking Sides
Literature and Discontinuity
Structure of the Fait-Divers
The Last Word on Robbe-Grillet?
The Imagination of the Sign
The Structuralist Activity
La Bruyère
The Metaphor of the Eye
The Two Criticisms
What Is Criticism?
Literature and Signification