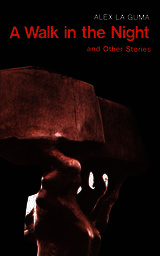 BUY
A Walk in the Night and Other Stories
by Alex La Guma
Northwestern University Press, 1967
Cloth: 978-0-8101-0399-3
Paper: 978-0-8101-0139-5
In the title story, in a Cape Town shantytown called District Six in the 1960s, Michael Adonis has lost his job at a metal sheet factory after an argument with a white supervisor. Illuminating the toxic effects of poverty, police brutality, and violence, the book paints a stark and unforgettable portrait of Adonis's emotional and physical destruction in apartheid South Africa. These works reveal the plight of non-whites in apartheid South Africa, laying bare the lives of the poor and the outcasts who filled the ghettoes and shantytowns.