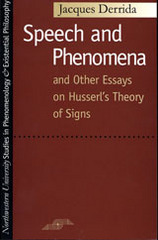 Speech and Phenomena: And Other Essays on Husserl's Theory of Signs
by Jacques Derrida
translated by David B. Allison
preface by Newton Garver

In Speech and Phenomena, Jacques Derrida situates the philosophy of language in relation to logic and rhetoric, which have often been seen as irreconcilable criteria for the use and interpretations of signs. His critique of Husserl attacks the position that language is founded on logic rather than on rhetoric; instead, he claims, meaningful language is limited to expression because expression alone conveys sense. Derrida's larger project is to confront phenomenology with the tradition it has so often renounced--the tradition of Western metaphysics.
TABLE OF CONTENTS