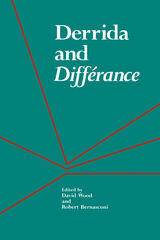 A collection of six essays by British and American philosophers, Derrida and Différance represents recent appropriations of Derrida's thought at the Warwick Workshops on Continental Philosophy. With an introductory letter by and interview with Derrida, Derrida and Différance focuses on the celebrated term "différance," a neologism devised by Derrida to denote the influence of differentiation in the structuring of all signification.
AUTHOR BIOGRAPHY

Jose Medina is Assistant Professor of Philosophy at Vanderbilt University. He is author of "Speaking from Elsewhere: A New Contextualist Perspective on Meaning, Identity, and Discursive Agency" (2005) and "The Unity of Wittgenstein's Philosophy" (2002).

David Wood is Professor of Philosophy at Vanderbilt University, and Honorary Professor at the University of Warwick. His previous books include "The Step Back: Ethics and Politics after Deconstruction "(2005)," Thinking After Heidegger" (Blackwell, 2002), "The Deconstruction of Time" (2001), "Derrida: A Critical Reader "(Blackwell, 1992), and "Philosophy at the Limit" (1990).

Robert Bernasconi is Lillian and Morrie Moss Professor of Philosophy at the University of Memphis. He has published numerous articles and collections including "The Question of Language in Heidegger's History of Being" (1985), and "Heidegger in Question" (1993).

Notes on the Contributors