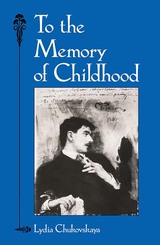 To the Memory of Childhood
by Lydia Chukovskaya
translated by Eliza Klose Kellogg
Northwestern University Press, 1988
Paper: 978-0-8101-0790-8
For years Lydia Chukovskaya's support for persecuted writers cut her off from her own audience. Even her name was banned in the USSR, and she was expelled from the Union of Writers in 1974. Though unable to publish at home and cut off from contacts with readers and editors, Chukovskaya continued to write. To the Memory of Childhood, her loving chronicle of growing up beside the Gulf of Finland with her father, the writer Kornei Chukovsky, reveals the sources of her strength and her belief in the power of the written word.

Her father is a household name in Russia because of his tales in verse for children. But his literary accomplishments ranged far beyond bedtime stories. As a critic he wrote controversial articles and lively profiles of cultural figures; as a translator he introduced Whitman, Twain, Kipling, and Wilde to Russian readers. When his children's literature was attacked in the 1920s and 1930s, he turned to editing, scholarship, and articles on translation. A man of boundless energy, he played a vital role in his country's cultural life until his death in 1969. "I am not writing Kornei Ivanovich's biography," Chukovskaya says, "but he was the author of my childhood."
AUTHOR BIOGRAPHY
LYDIA CHUKOSKAYA (1907—1996), the daughter of the beloved children's author Kornei Chukovsky, numbered most of the great Russian writers of her day among her friends. She is the author of Sofia Petrovna, also published by Northwestern, and The Akhmatova Journals.
TABLE OF CONTENTS