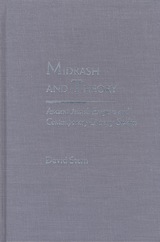 In Midrash and Theory, David Stern presents an approach to midrashic literature through the prism of contemporary theory.

As midrash--the literature of classical Jewish Scriptural interpretation--has become the focus of new interest in contemporary literary circles, it has been invoked as a precursor of post-structuralist theory and criticism. At the same time, the midrashic imagination has undergone a revival in the larger Jewish community and shown itself capable of exercising a powerful influence and hold on a new type of contemporary Jewish writing. Stern examines this resurgence of fascination with ancient Jewish interpretation from the persepctive of the cultural relevance of midrash and its connection to its original historical and literary contexts.
AUTHOR BIOGRAPHY
David Stern is professor of postbiblical and medieval Hebrew literature at the University of Pennsylvania. He is the author or editor of several books, including Parables in Midrash and Rabbinic Fantasies, and has written extensively on both classical and modern Jewish literature and on their relations to contemporary literary theory.
TABLE OF CONTENTS