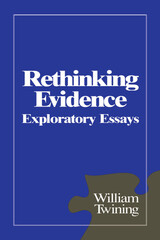 Rethinking Evidence: Exploratory Essays
by William Twining
Northwestern University Press, 1994
Paper: 978-0-8101-1142-4
Evidence, proof and probabilities, rationality, skepticism and narrative in legal discourse, and the reform of criminal evidence have all been the subject of lively debates in recent years. This book brings together seminal and new essays from a leading contributor to this new evidence scholarship. Rethinking Evidence contains a series of linked essays which consider historical, theoretical, and applied themes from a broad interdisciplinary perspective. It brings together well-known papers and also includes substantial new essays on the nature and scope of the law of evidence, lawyers' stories, and the case of Edith Thompson. These readable and provocative essays represent a major contribution not only to legal theory but also to the general study of discourse about evidence in many disciplines.
TABLE OF CONTENTS