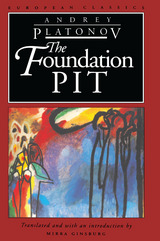 Northwestern University Press, 1994
Paper: 978-0-8101-1145-5
Once known only to a small circle of admirers in Russia and the West, Andrey Platonov (1899-1951) has emerged to assume his rightful place as one of the major Russian writers of the twentieth century. Set during a small Russian town during the forcible collectivization of agriculture, The Foundation Pit portrays a group of workmen and local bureaucrats engaged in digging the foundation pit for a grand building where all the town's will live happily and "in silence."
AUTHOR BIOGRAPHY
ANDREW PLATANOVICH PLATONOV (1899–1951), the son of a railway worker, was born near Voronezh. He fought in the Red Army during the Civil War, and then became an electrical engineer and land-reclamation specialist. His work was barred from publication for long periods during his life. His posthumous "rediscovery" began with the 1958 publication in Russia of a collection of short stories. His work available in English includes The Fierce and Beautiful World.