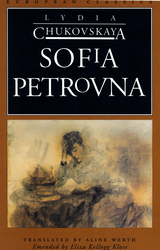 Sofia Petrovna
by Lydia Chukovskaya
translated by Aline Werth
Northwestern University Press, 1989
Paper: 978-0-8101-1150-9
Sofia Petrovna is Lydia Chukovskaya's fictional account of the Great Purge. Sofia is a Soviet Everywoman, a doctor's widow who works as a typist in a Leningrad publishing house. When her beloved son is caught up in the maelstrom of the purge, she joins the long lines of women outside the prosecutor's office, hoping against hope for good news. Confronted with a world that makes no moral sense, Sofia goes mad, a madness which manifests itself in delusions little different from the lies those around her tell every day to protect themselves. Sofia Petrovna offers a rare and vital record of Stalin's Great Purges.
AUTHOR BIOGRAPHY
LYDIA CHUKOSKAYA (1907—1996), the daughter of the beloved children's author Kornei Chukovsky, numbered most of the great Russian writers of her day among her friends. She is the author of To the memory of Childhood, also published by Northwestern, and The Akhmatova Journals
TABLE OF CONTENTS