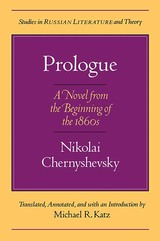 Nikolai Chernyshevsky (1828-89) is most famous as the author of What is To Be Done? (1863), one of the most inspirational texts in the Russian revolutionary movement. But during his long and lonely Siberian exile Chernyshevsky wrote Prologue, an novel of extraordinary interest for anyone eager to understand the course of Russian history and the political debate over democratization taking place in Russia today.

Set in Petersburg in 1857, on the eve of the great reforms that would include the emancipation of the serfs, Prologue expresses the author's hostility toward Russian liberals, their halfhearted attempts to alleviate the sufferings of peasants, and their insufficient support of revolution, while also exploring the obstacles in the path of women's social and personal development in the Victorian era. Michael R. Katz's new translation makes this singular work available to the non-Russian reading public for the first time.
AUTHOR BIOGRAPHY

Nikolay Gavrilovich Chernyshevsky (July 12, 1828 – October 17, 1889) was a Russian revolutionary democrat, materialist philosopher, critic, and socialist (seen by some as a utopian socialist). He was the leader of the revolutionary democratic movement of the 1860s, and had an influence on Vladimir Lenin, Emma Goldman, and Serbian political writer and socialist Svetozar Marković.