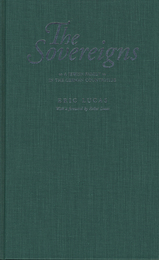 This memoir is a moving testament to the power of family. The Lucas clan was a close-knit, successful family of rural German Jews—butchers and meat dealers—whose strength and pride was challenged by the rise of Nazism. As the family grew, so did its prosperity and power, and the sons, daughter, and their relatives became known as the Sovereigns.

But anti-Semites, under the protection of the Nazi regime, began to settle old scores, and targeted the economically successful rural Jews. New laws stripped Jewish meat dealers of their rights, and Aryan competitors eagerly forced them aside. That was only the beginning. In the Holocaust that followed, some members of the family escaped. Others did not.
AUTHOR BIOGRAPHY
ERIC LUCAS (1915–1996) Eric Lucas was born in Aachen, Germany, in 1915. Immediately after Kristallnacht he left Germany and eventually settled in Palestine, where he worked on a kibbutz and was active in the Zionist movement. The Sovereigns was written in Palestine immediately after World War II. Lucas died in Israel in 1996.