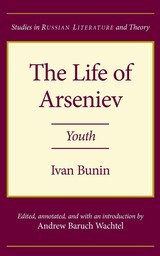 Ivan Bunin was the first Russian writer of the twentieth century to be award the Nobel Prize in literature. Like many other Russian writers, he emigrated after the Revolution and never returned to his homeland; The Life of Arseniev is the major work of his émigré period.

In ways similar to Nabokov's Speak, Memory, Bunin's novel powerfully evokes the atmosphere of Russia in the decades before the Revolution and illuminates those Russian literary and cultural traditions eradicated in the Soviet era. This first full English-language edition updates earlier translations, taking as its source the version Bunin revised in 1952, and including an introduction and annotations by Andrew Baruch Wachtel.
AUTHOR BIOGRAPHY
IVAN BUNIN (1870–1953) was the first Russian writer of the twentieth century to be award the Nobel Prize in literature.
REVIEWS
"Bunin's late novel does indeed possess all the best characteristics of his earlier style and approach, developing a richness that is full and autumnal without being in the least decadent. Bunin's descriptive prose is alive in the same absolute sense as that of D. H. Lawrence." —New York Review of Books