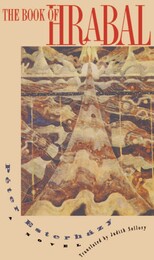 An elaborate, elegant homage to the great Czech storyteller Bohumil Hrabal (author of Closely Watched Trains), The Book of Hrabal is also a farewell to the years of communism in Eastern Europe and a glowing paean to the mixed blessings of domestic life. Anna, blues-singing housewife and mother of three, addresses her reminiscences and reflections to Hrabal. They swing from domestic matters, to accounts of the injustices suffered by her family during the Stalinist 1950s and the police harassment in subsequent years, to her husband's crazy ideas. He frets over his current project, a book celebrating Hrabal, but seems unable to write it. Meanwhile, two angels, undercover as secret policemen, shadow the household-communicating via walkie-talkie-to prevent Anna from aborting her fourth child. God himself (aka Bruno) enters the scene; he chats with Hrabal, takes saxophone lessons from an irreverent Charlie Parker (unfortunately even this doesn't cure his tone-deaf ear), and tries to play the saxophone to dissuade her from ending the pregnancy.
AUTHOR BIOGRAPHY
Péter Esterházy (born 14 April 1950 in Budapest) is one of the most widely known contemporary Hungarian writers. His books are considered to be significant contributions to postwar literature.

Judith Sollosy is Senior Editor at Corvina Books in Budapest. Her translations include Staccato by István Örkény and Enre Ady's Selected Shorter Fiction.