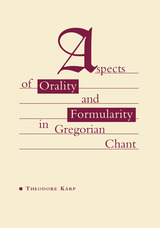 Aspects of Orality and Formularityin Gregorian Chant is a milestone publication in the study of medieval monophonic music. In its movement away from the concept of chants as products and toward the idea of chants as processes, it will markedly change accepted ways of thinking about this musical form.

The first essay evaluates forms of evidence that may shed light on the nature of orality that led to the surviving notational records of Gregorian chant and assembles evidence that supports the conclusion that fidelity of transmission represented an important goal of the Franks. The second essay treats formulas that cross the boundaries of individual liturgical genres and modes. The third essay defines the varying kinds of musical formulas in chant and proposes a chronological ordering of the genre of second-mode tracts.

The fourth essay treats the transmission of a stable melody and explores the ways in which one basic melody may be adapted to texts of widely differing structures and lengths. The fifth essay deals with a group of unstable melodies that furnished difficulties in modal classification. The sixth essay explores the problems faced by scribes seeking to represent in diastematic notation melodies employing tones not normally admitted into the medieval gamut. The seventh essay takes up the role of the formula in introits, a neumatic genre intended forchoral performance.

The two final essays look at second-mode tracts and at the interrelationship between Roman and Gregorian chant.