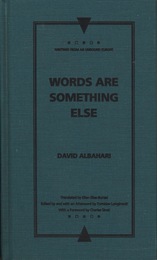 "Each of Albahari's stories is a literary experiment. After reading them, one is left with a lingering effect and a wish to go back and reread the tales in order to ponder further the mystery of the creative process of writing." —World Literature Today
— -

"David Albahari writes in the rich Balkan tradition of urbanity and multiculturalism . . . the stories are less about the particularities of place than about the universal riddles of language . . . playful and good-natured, recalling the metafictions of Robert Coover and Albahari's countryman Danilo Kis." —New York Times Book Review

"A masterly collection . . . accomplished and resonant tales: powerful evidence of the ermergence of yet another important Eastern European writer--and a pleasurable and rewarding surprise for American readers." —Kirkus
— -

Part I
Three Bus Stops Home
Is This Age, Kid?
The Stories We Tell
The Gospel According to My Father
Mama
The Playground
The Damp
The Great Rebellion at the Stuln Nazi Camp
The Movies
An Attempt at Describing the Death of Ruben Rubenović, Former Textiles Salesman
Picture, Window
Jerusalem

Part III
The Essay
What Does That Prove?
The Writer
Plastic Combs
Buttons
The Pope
Mute Song