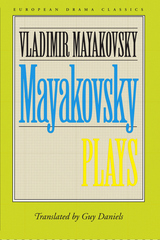 One of Russia's greatest poets, Vladimir Mayakovsky (1893–1930) was a Futurist, early Bolshevik, and champion of the avant-garde. Despite his revolutionary youth, he became increasingly disillusioned with Soviet society, and three of his plays—all banned until after Stalin's death—reflect his changing assessments of the Revolution.

Mayakovsky: Plays includes Mystery Bouffe, a mock medieval mystery written in 1918 to celebrate the first anniversary of the Revolution; The Bathhouse, a sharp attack on Soviet bureaucracy subtitled "a drama of circus and fireworks"; and The Bedbug, in which a worker with bourgeois pretensions is frozen and resurrected fifty years later, when the world has become a material paradise. The collection also includes Mayakovsky's more personal first play, Vladimir Mayakovsky: A Tragedy.
AUTHOR BIOGRAPHY

VLADIMIR VLADIMIROVICH MAYAKOVSKY (1893–1930) was a Russian and Soviet poet and playwright. He is among the foremost representatives of early-twentieth century Russian Futurism.
​
GUY DANIELS has translated widely from Russian. He is the editor and translator of Russian Comic Fiction.