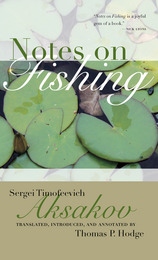 Notes on Fishing was Sergei Aksakov's first book and Russia's first angling treatise. It presents a Russian gentleman's observations on the fishing tackle, angling techniques, and fish species he came to know during five decades of adventure-filled fishing in the vast Russian steppe and the environs of Moscow. But it is goes beyond a mere discourse on angling, offering philosophical, literary, linguistic, ethnographic, biological, and conservationist observations. Aksakov has imbued his notes with a deep fondness for the land and an expertly conveyed atmosphere of personal and national nostalgia.
AUTHOR BIOGRAPHY
Sergei Aksakov (1791 - 1859) took up writing late in life, under the influence of his good friend Gogol. He was widely acknowledged as a master of Russian prose.

Appendix 1: Selected Fishing Prose by Aksakov
"Floodwater and Fishing the Spring Runoff"
"Spear-Fishing"
From "A Few Words on Sportsmen's Superstitions and Signs"
From "Strange Sporting Occurrences"
From "New Notes on Sport"
"A Few Words on Angling in Early Spring and Late Autumn"
Letter to the Editor of Sporting Journal, 23 October 1858

Appendix 2: Selected Fishing Poetry by Aksakov
"There is my homeland!"
"The Fisherman's Woe: A Russian Idyll"
"To Grisha"
"Believe me, there's no greater torment"
"Swim forth with caution"
"There at last, for all our patience"
"Fisherman, fisherman, stern is your fate"
"31 October 1856"
"17 October: To A. N. Maikov"