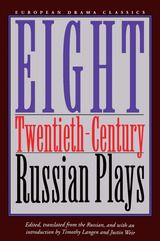 Russia produced more notable dramas in the twentieth century than at any other time in its history, yet many of the plays from this period have been only sporadically available in English, and others have never been translated before. For each of these eight works, Timothy Langen and Justin Weir provide an insightful introduction to the literary, cultural, and political contexts in which the plays first appeared, considering the influence that various literary movements had on the development of Russian drama and exploring the effect of the increasingly politicized climate of the new Soviet state.

Included in this volume:

Sacred Blood, by Zinaida Gippius; The Unknown Woman, by Alexander Blok; Vladimir Mayakovsky, by Vladimir Mayakosky; The Case of the Entry Room, by Victor Ardov; Squaring the Circle, by Valentin Kataev; Elizaveta Bam, by Daniil Kharms; Grain, by Vladimir Kirshon; and The Guests, by Leonid Zorin.
AUTHOR BIOGRAPHY
Timothy Langen is an assistant professor in the Department of German and Russian Studies at the University of Missouri.
Justin Weir is a Mellon postdoctoral fellow in the Department of Slavic Languages and Literatures at Northwestern University.
TABLE OF CONTENTS

The Case of the Entry Room
Victor Ardov

Squaring the Circle: A Vaudeville in Three Acts
Valentin Kataev

The Guests: A Drama in Three Acts
Leonid Zorin