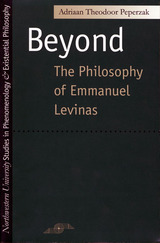 Although Emmanuel Levinas is widely respected as one of the classic thinkers of our century, the debate about his place within Continental philosophy continues. In Beyond: The Philosophy of Emmanuel Levinas, Adriaan Theodoor Peperzak shows Levinas's thought to be a persistent attempt to point beyond the borders of an economy where orderly interests and ways of reasoning make us feel at home--beyond the world of needs, beyond the self, beyond politics and administration, beyond logic and ontology, even beyond freedom and autonomy.

Peperzak's examination begins with a general overview of Levinas's life and thought, and shows how issues of ethics, politics, and religion are intertwined in Levinas's philosophy. Peperzak also discusses the development of Levinas's relations with Husserl and Heidegger, demonstrating thematically the evolution of both Levinas's anti-Heideggerian view of technology and his critical attitude toward nature.
AUTHOR BIOGRAPHY
ADRIAAN THEODOR PEPERZAK is Arthur J. Schmitt Professor of Philosophy at Loyola University, Chicago.  He has published widely in the field of philosophy; his most recent books are To the Other: An Introduction to the Philosophy of Emmanuel Levinas and Ethics as First Philosophy.
TABLE OF CONTENTS


Preface
Abbreviations of Works by Levinas
1. Emmanual Levinas
2. Jewish Existence and Philosophy
3. Judaism According to Levinas
4. From Phenomenology through Ontology to Metaphysics: Levinas's Persepctive on Husserl and Heidegger from 1927 to 1950
5. From Intentionality to Responsibility: On Levinas's Philosophy of Language
6. Through Being to the Anarchy of Transcendance: A Commentary on the First Chapter of Otherwise Than Being
7. The Other, Societ, People of God
8. Technology and Nature
9. Presentation
10. Transcendance
11. Passages
12. Becoming Other
13. Il y a and the other: Levinas vis-à-vis Hegel and Kant
14. On Levinas's Criticism of Heidegger
15. Dialogue with Edith Wyschogrod
Notes
Index