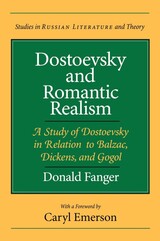 Dostoevsky and Romantic Realism: A Study of Dostoevsky in Relation to Balzac, Dickens, and Gogol
by Donald Fanger
foreword by Caryl Emerson
Northwestern University Press, 1998
Paper: 978-0-8101-1593-4
Dostoevsky and Romantic Realism is Donald Fanger's groundbreaking study of the art of Dostoevsky and the literary and historical context in which it was created. Through detailed analyses of the work of Balzac, Dickens, and Gogol, Fanger identifies romantic realism, the transformative fusion of two generic categories, as a powerful imaginary response to the great modern city. This fusion reaches its aesthetic and metaphysical climax in Dostoevsky, whose vision culminating in Crime and Punishment is seen by Fanger as the final synthesis of romantic realism.
AUTHOR BIOGRAPHY
Donald Fanger is Harry Levin Professor of Literature "Emeritus," Harvard University. His previous books include Dostoevsky and Romantic Realism and The Creation of Nikolai Gogol, He lives in Cambridge, Massachusetts.
TABLE OF CONTENTS


Note on Transliteration and Translation
Foreword to the 1998 Edition
Preface

I. THE ROMANTIC REALISTS
1. Realism, Pure and Romantic
2. Balzac: The Heightening of Substance
3. Dickens: Realism, Subjunctive and Indicative

II. THE INHERITOR: DOSTOEVSKY
5. The Most Fantastic City: Approaches to a Myth
6. Evolution of the Myth: From Poor Folk to Notes from the Underground
7. Apogee: Crime and Punishment
8. Poetics of the City
Conclusion
Selected Bibliography
Notes
Index