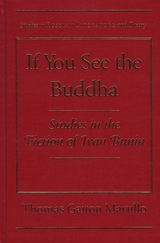 If You See the Buddha: Studies in the Fiction of Ivan Bunin
by Thomas Gaiton Marullo
Northwestern University Press, 1999
Cloth: 978-0-8101-1612-2
In a 1994 American Scholar article, Andrew Wachtel wrote of Ivan Bunin: "[He] is undoubtedly the greatest Russian writer whom no one reads." With the collapse of communism, however, Bunin's works are undergoing a revival in both Russia and the West. As enthusiastic as readers and publishers have been, scholarship has not kept pace with this "rediscovery," in part due to the many contradictions in Bunin's writing, in part because much past criticism has been used to advanced the critic's own view of what they love or hate about "modern" life.

In If You See the Buddha, Thomas Gaiton Marullo begins addressing the lack of scholarship by establishing that Bunin was a thoroughly modern writer whose images and ideas were rooted more in the twentieth century than in the nineteenth. But beyond that point, Marullo states that, of all the systems of belief that Bunin adopted and adapted throughout his career, it was his interest in Buddhism that best elucidates the dynamics of his writing. Key Buddhistic concepts figured prominently in Bunin's work. These ideas enabled him to make sense of his world and serves as the catalyst for an ars poetica that tempered his philosophical and aesthetic restiveness and contributed a sense of timelessness to work from both his prerevolutionary and émigré periods.
AUTHOR BIOGRAPHY
Thomas G. Marullo is a professor of Russian at the University of Notre Dame. He is the author of numerous books about Ivan Bunin.
TABLE OF CONTENTS


Preface
Chapter One. Bunin as Buddhist Disciple
Chapter Two. Self as Peasant: The Village
Chapter Three. Self as Lord: Dry Valley
Chapter Four. Self as Entrepreneur: The Gentleman from San Francisco
Chapter Five. Self as Youth: Mitia's Love
Chapter Six. Self as Actor: The Elagin Affair
Chapter Seven. Self as Author: The Life of Arsen'ev
Conclusion
Notes
Index