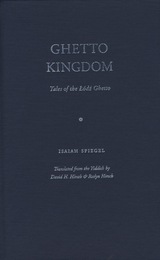 Isaiah Spiegel was an inmate of the Lodz Ghetto from its inception in 1940 until its liquidation in 1944. While there, he wrote short stories depicting Jewish life in the ghetto and managed to hide them before he was deported to Auschwitz. After being freed, he returned to Lodz to retrieve and publish his stories.
​
The stories examine the relationship between inmates and their families, their friends, their Christian former neighbors, the German soldiers, and, ultimately, the world of hopelessness and desperation that surrounded them. In using his creative powers to transform the suffering and death of his people into stories that preserve their memory, Spiegel succeeds in affirming the humanity and dignity the Germans were so intent on destroying.

Originally published as Malchut geto (Malkhes geto) in Yiddish.
AUTHOR BIOGRAPHY
ISAIAH SPIEGEL (1906–1990) was born in the industrial city of Łódź in 1906. After surviving Auschwitz, he immigrated to Israel, where he continued to write stories, novels, poems, and essays.

DAVID H. HIRSCH, Professor Emeritus of English and American literature and Judaic studies at Brown University, has translated a variety of Yiddish and Polish texts with ROSLYN HIRSCH, who escaped the ghetto with her mother in 1943 and remained in hiding until liberation in 1945. She immigrated to the United States in 1949 and is currently working on several translations of Holocaust writers.
REVIEWS
". . . first published in Warsaw in 1947 from a manuscript that the author had hidden in the ground before he was sent from the Łódź ghetto to Auschwitz, [Ghetto Kingdom] was regarded as the first Yiddish book published in Poland after the Holocaust." —Rachel Rojanski, author of Yiddish in Israel— -