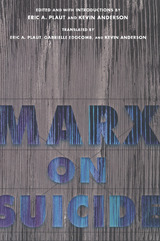 Marx on Suicide
by Karl Marx
edited by Eric A. Plaut
translated by Kevin Anderson, Eric A. Plaut and Gabrielle Edgcomb

Northwestern University Press, 1999
Paper: 978-0-8101-1638-2
In 1846, two years before the publication of The Communist Manifesto and twenty-one years before the publication of Das Kapital, Karl Marx published an essay titled "Peuchet on Suicide." Based on the writings of Jacques Peuchet, a leading French police administrator, economist, and statistician whose memoirs included discussions of suicides in Paris, Marx's essay is not a straightforward translation of Peuchet but instead an essay reflecting his own strong positions on the subjects addressed in Peuchet's work.
AUTHOR BIOGRAPHY
Karl Heinrich Marx (5 May 1818 – 14 March 1883) was a German philosopher, economist, sociologist, historian, journalist, and revolutionary socialist. His ideas played a significant role in the development of social science and the socialist movement.

Eric A. Plaut is a professor emeritus of Northwestern University Medical School.

Gabrielle Edgcomb was a poet and social critic.

Kevin Anderson is an associate professor in the Department of Sociology at Northern Illinois University.
TABLE OF CONTENTS

Marx on Suicide in the Context of Other Views of Suicide and of His Life
Eric A. Plaut