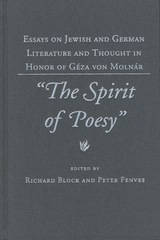 A testament to the "spirit of poesy" that informs the life and work of Geza von Molnar, this volume of essays comes together around his principal preoccupations: the philosophical foundations of Goethe's writings, the structure and reception of German romanticism, the ethics of reading, and the fate of European Jewry. At the center of this work is the idea of a genuinely free humanity -- from its ambiguous presence in the aesthetic projects of Goethe and German romanticism to its utter absence in the Nazi extermination camps. Combining works in philosophy, literature, and Jewish studies by established and younger scholars, this collection contributes significantly to an understanding of German culture.
AUTHOR BIOGRAPHY
Richard Block is an assistant professor in the Department of German and Slavic Languages and Literatures at the Unviersity of Colorado. His publications incude studies of Althusser and Marx, Brecht and Adorno, Kleist and Schleiermacher, Benjamin and Klages, and Stifter and Hungarian politics. He is currently completing a book-length manuscript investigating Italy and the German literary imagination.

Peter Fenves is a professor of German, comparative literature, philosophy, and political science at Northwestern University. His books include A Peculiar Fate: Metaphysics and World-History in Kant; "Chatter": Language and History in Kierkegaard; and Arresting Language--from Leibniz to Benjamin. He is the editor of Raising the Tone of Philosophy: Late Essays by Immanuel Kant, Transformative Critique by Jacques Derrida and the translator of Werner Hamacher's Premises. He has written numerous articles on philosophy, literature, and literary theory.
TABLE OF CONTENTS

Can a Jew Have Feelings? The Aesthetics of Cultural Suicide in Moses Mendelssohn's Letters on Sentiments (1755)
Jeffrey S. Librett

Writing Down (Up) the Truth: Hegel and Schiller at the End of the Phenomenology of Spirit
John McCumber

Toward an Understanding of Romantic Darstellung: Klopstock's Representation of Life
Kerstin Behnke

On Germany: Germaine de Stael and the Internationalization of Romanticism
Kurt Mueller-Vollmer

Constructions of Reading: Reading between Freud and Benjamin
Rainer Nagele

Appendix: A Bibliography of Writings
by Geza von Molnar