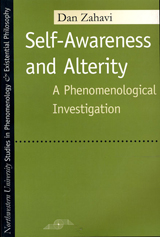 Winner of the 2000 The Edward Goodwin Ballard Prize in Phenomenology

In the rigorous and highly original Self-Awareness and Alterity, Dan Zahavi provides a sustained argument that phenomenology, especially in its Husserlian version, can contribute something decisive to the analysis of self-awareness. Taking on recent discussions within both analytical philosophy (Shoemaker, Castaneda, Nagel) and contemporary German philosophy (Henrich, Frank, Tugendhat), Zahavi argues that the phenomenological tradition has much more to offer when it comes to the problem of self-awareness than is normally assumed. As a contribution to the current philosophical debate concerning self-awareness, the book presents a comprehensive reconstruction of Husserl's theory of pre-reflective self-awareness, thereby criticizing a number of prevalent interpretations and a systematic discussion of a number of phenomenological insights related to this issue, including analyses of the temporal, intentional, reflexive, bodily, and social nature of the self.
AUTHOR BIOGRAPHY
Dan Zahavi is a professor of philosophy and the director of the Center for Subjectivity Research at the University of Copenhagen. He is the author of more than eight books, including Subjectivity and Selfhood: Investigating the First-Person Perspective, Self and Other: Exploring Subjectivity, Empathy, and Shame, and Husserl's Legacy.
TABLE OF CONTENTS