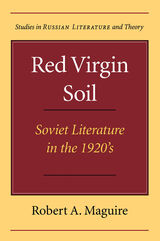 Red Virgin Soil: Soviet Literature in the 1920's
by Robert A. Maguire
Northwestern University Press, 2000
Paper: 978-0-8101-1741-9
First published in 1968, this classic is a richly detailed study of the eponymous journal that was the most significant Soviet literary journal of the 1920s. It is also a comprehensive survey of Soviet literary culture in a critical period when writers could still engage in public debate.
TABLE OF CONTENTS