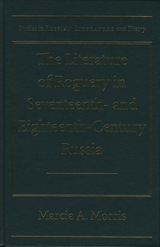 In the eighteenth century, when the picaresque had been eclipsed by neoclassical and preromantic models in much of Europe, it flourished anew in Russia. Marcia A. Morris's book, a study of this flowering and the antecedents of the picaresque in the seventeenth-century, offers new insight into both the genre and its broad appeal for Russian readers. Morris situates the earlier tales of roguery in the tumultuous social milieu of the waning medieval period and shows how these texts mirror many of the manifestations of subversive behavior in the larger culture. She also shows how eighteenth-century "Europeanized" men of letters, who publicly scorned this earlier literature, actually adapted its popular patterns in their own Western-inspired works. Her book provides fresh readings of several well-known texts and resurrects forgotten eighteenth-century picaresques, revealing their fusion of Western and indigenous aesthetics and their broader cultural underpinnings.
AUTHOR BIOGRAPHY
Marcia A. Morris is a Professor of Slavic Languages at Georgetown University.
TABLE OF CONTENTS