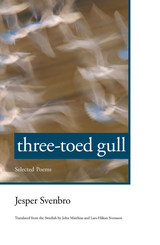 Perhaps the most widely respected and read poet of his generation in Sweden, Jesper Svenbro makes his debut in the English-speaking world with this selection of poems drawn from his seven previous volumes and impeccably translated by John Matthias and Lars-Håkan Svensson. At times intellectual and erudite, at other times invoking intimacy and closely observed memories, Svenbro appears here at his most richly allusive, calling with consummate ease upon the myths of the Greeks, real and imaginary journeys in Lapland, the poetry of Sappho and T. S. Eliot, the plaints and joys of childhood, and the evocations of nature and of art. Whether in intricate formal innovations or flights of free verse, in the linguistic politics of "Stalin as Wolf" or the political linguistics of "A Critique of Pure Representation," Svenbro's work captures in its every nuance the transcendent possibilities of the poet's art.
AUTHOR BIOGRAPHY
Jesper Svenbro was born in 1944 in the small town of Landskrona in southern Sweden. He studied classics at Lund University and Greek with Eric Havelock at Yale, and lived in Italy and then France, where he has for many years held a post at the Centre National de Recherche Scientifique. An internationally renowned classical scholar, Svenbro has had most of his works translated into English. His first collection of poems was published in 1966; with his second, Element till en kosmologi, published in 1979, he began to be recognized as one of Sweden's most original younger poets. By now the author of many volumes, Svenbro is one of the leading and most widely read European poets of his generation.
TABLE OF CONTENTS