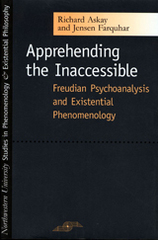 With its unique perspective on Freud's work, Apprehending the Inaccessible puts readers in a better position to appreciate his contributions and evaluate the relationship between his and other philosophical world views. The authors, both of whom have extensive backgrounds in philosophy and psychology, present balanced critical analyses of crucial developments in, for example, the evolution of the Freudian notion of the unconscious, and the engagement of existential phenomenology with Freudian psychoanalysis. Askay and Farquhar then consider—often for the first time—individual thinkers' reflections on and interpretations of Freud, ranging from the primary figures in existential phenomenology to the most prominent figures in the existential psychoanalytic movement. Even as their work offers a new approach to Freudian thought, it reasserts the importance of alternative views found in existential phenomenology as those views pertain to psychoanalysis and the question of apprehending the inaccessible.
AUTHOR BIOGRAPHY
RICHARD ASKAY is professor of philosophy at the University of Portland.

JENSEN FARQUHAR is a practicing psychotherapist and an editor in the field of psychology and philosophy.
REVIEWS
"This book is a wonderful journey through the probable historical influences on many of Freud's most basic assumptions; and a moving as well as illuminating conversation between many existential phenomenologists and Freud."