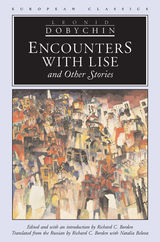 In 1994 Russian writer Victor Erofeyev proclaimed Leonid Dobychin "one of the main heroes of twentieth-century Russian literature." Obscure for many years, Dobychin is now celebrated as a modernist master. His short stories are hailed as a sort of Soviet version of Joyce's Dubliners-subtle and tightly constructed miniatures linked by recurring themes and full of ironic juxtaposition, context, allusion, and style.

For Dobychin early Soviet society was an absurdist wonderland. He was not anti-Soviet but trans-Soviet, practicing realism but looking at reality from jarring angles. A typical day for a Dobychin hero includes participation in character-building sports, witnessing a parade, attending a funeral, and memorial to fallen communists-and finally reflecting at the end of the day that he almost met a pretty young sick-nurse. Dobychin's stories reveal a Brave New World where idealism rubs shoulders with heartless ambition and political denunciation, and ubiquitous acronyms and revolutionary cliché maul the language. But he also describes the absurdities of a place where office girls pray for the arrest of disliked co-workers and prisoner work gangs are made to spell out beautiful but empty platitudes in beds of sand. This collection includes all of the stories published in Dobychin's lifetime, plus two stories that remained unpublished until the late 1980s.
AUTHOR BIOGRAPHY
LEONID DOBYCHIN (1894–1936) was born in Dvinsk (today's Daugavpils), Latvia, in 1894. In 1936, shortly after the publication of his novel The Town of N, Dobychin was attacked by the Leningrad Writers' Union. He disappeared the next day and was never seen again.

RICHARD C. BORDEN is the author of The Art of Writing Badly: Valentin Kataev's Mauvism and the Rebirth of Russian Modernism (NUP 1999 ) and co-translator of Dobychin's The Town of N (1998), both published by Northwestern University Press. He lives in the United Kingdom.

NATALIA BELOVA is also co-translator of Dobychin's The Town of N.
REVIEWS
"A revelation: one of the subtlest and most accomplished of all modern Russian novels." —Kirkus Reviews
— -

"Encounters with Lise represents an important addition to the body of literary translation from the Russian."  —Slavic and East European Journal
— -